Jesse James was one of the most famous or infamous outlaws of the American west – robbing stage coaches, banks, trains, and leader of the James-Younger gang.

Why am I talking about Jesse James you might ask? And where does the guerilla bit come into it?

Well, once upon a time, in a land far far away….lol, no simple really. Jesse and his brother Frank James were confederate guerrilla's (also known as bushwackers). Road Runner, fellow Okie when we are there, requested a Jesse James guerrilla shirt.

With eyebrows slightly raised, of course I accepted the challenge and had him send me a picture. (As seen below)

Not hard really, finally found fabric that would drape nicely in the required grey, a simple black bias binding should work and found some studs that could replicate the trim.

It came time in the book to get onto this one and so I fiddled around with a pattern and created the very simple oversized guerilla shirt with slanted rounded pockets. Ta dah! Road Runner's guerilla shirt.

(Hmm they could actually have had more slant on the pockets now seeing it on the mannequin, noticeable when it's laying flat)

These shirts with their pockets shaped like that apparently made for ease of carrying extra ammo and accessibility to it. (so I've heard)

Personally I'm thinking that if you are galloping around on a horse at break neck speed you might lose it but then I thought about the drape of the fabric and figured it might well stay put due to the weight of the ammo.

The guerrilla shirts were often made by wives or sweethearts, some were elaborately embroidered, some plain, some with a placket and collar, made from various fabrics and patterns. According to civil war websites the shirts originated in Missouri but were similarly worn down through Texas.

Here are some more examples worn by the Duvall brothers and Bloody Bill Anderson. 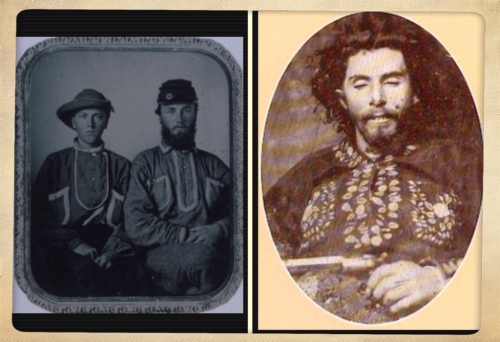 And the whole guerrilla story with William C Quantrill and Bloody Bill Anderson is a tale for another day.