Jack and I have been through Amarillo many a time before. Every time we do he makes the comment about how he has been to The Big Texan before………..but I haven't!!

Finally we stopped and I got to experience this fabulous venue on Route 66 with its colourful hotel, the big cowboy, the odd cowboy boot wearing excited dinosaur and the big bull outside the restaurant. 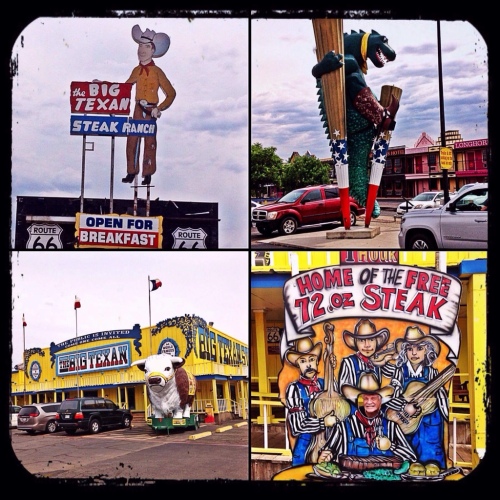 Inside is a gift shop, laser shooti arcade, their own craft brews and bar, a fabulous restaurant with stuffed animals, deer horn chandeliers, wait staff all wearing the mandatory cowboy boots and hat and of course it wouldn't be complete without the outdoor area and the big rocking chair!

What a unique experience! Oh and I forgot to mention this is the home of the 72oz steak that if you eat it in under an hour you get it for free! Holy cow! That's massive but one lady, Molly Schuyler, holds the current World Record for eating not 1 but 3 72oz steaks in under an hour – to be more precise, she did it in around 20 minutes!! 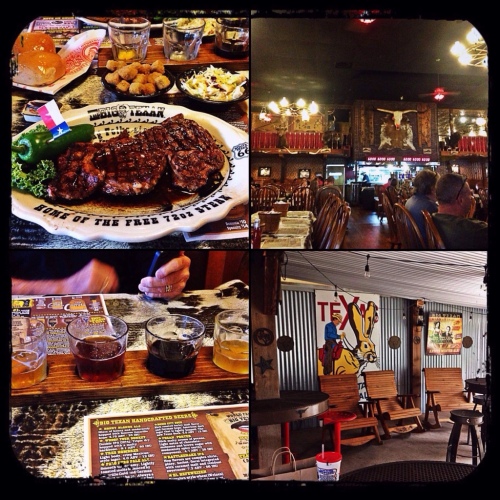 This restaurant has been running since 1960 and if you haven't had a chance to stop there then you need to! Even if only to brows the gift shop and check out the place.

Nothing much else in Adrian, the poor little Cafe was struggling with burst water pipes this day meaning no rest rooms and no food service. There were people from Leeds, England, Chicago and us.

Again, every time we drive past the signs we say to each other, we should stop there one day, so came the time to take a side exit back onto Route 66 and visit the Blue Hole. 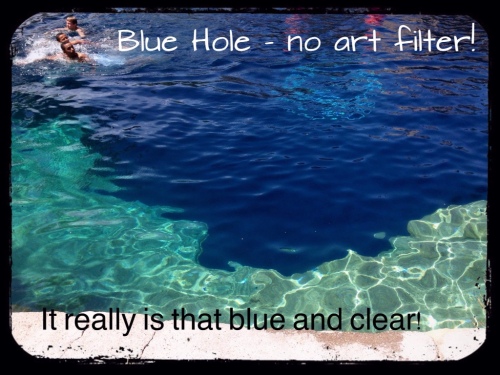 It's spectacular curiously crystal clear blue waters sit at a constant 61F/16C. It is 60ft wide, 81ft deep and has an outflow of 3000gal per minute. I'm curious about that and how large the outflow is, where does it go to, where does water come in? Divers can explore the hole but with lifeguards on duty it is for those wants to just jump into the refreshing waters from various rock points over and over again.

How many times have we been to Moriarty now and not once have we managed to get to the brewery?! I hear you all gasp in disbelief knowing Jack and I enjoy beer tasting, okay well drinking, especially trying out new local craft brews and we hadn't been to this one just two minutes from the hotel! 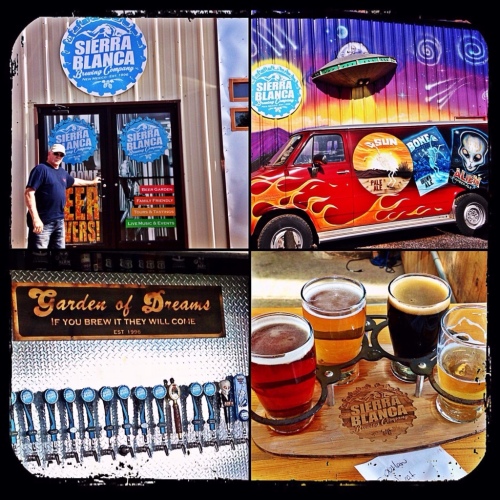 It's been in its current location since 2006 and has around 14 varieties on tap for tasting, beer flight samples, or full glasses, your choice. Here we sampled the Outlaw Lager, Alien Wheat, Alien Vanilla Milk Stout and the Pancho Verde Green Chile Cerveza. Then Jack went for a straight up Alien Wheat and I had the Cherry Wheat – I like that one too. One case Alien Wheat $30 bucks!

Into Grants to drive thru their new neon sign for a photo opportunity. We will visit this again in February and see it of an evening lit up! 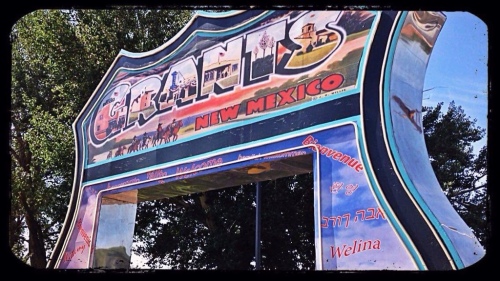 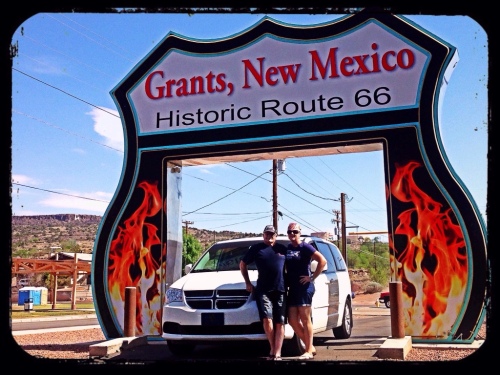 We stopped at the Mining Museum briefly and agin we will make time for this next trip as there is an underground tour of the uranium mine right below the building!

A small little building of National Heritage, the restored 1953 Flight Service Station. The Federal facility operated until 1973. It tells the tale of Charles Lindbergh's involvement in TAT's historic plane and train cross country travel, mail routes and his gegraphical aerial photography taken in 1929.

The photos were recreated in 2008.

The Beacon 62 power shed sat in the Zuni Mountains when it was in operation. Each beacon tower with its accompanying power shed and concrete arrow made for a visual “light line” along the route.

These beacons were located 10-15 miles apart with every 50miles having a landing strip which would also consist of actual radio contact and a weather station.

Also on the grounds is the metal route arrow of 59B moved to the museum location from El Morro.

The Transcontinental Airway was approved by congress in 1923 becoming the world's first civilian ground-based air navigation system. It was to improve airmail service from the then current daylight airmail service that took greater than 2 days.

The TAT passenger service cost $340 a ticket to get you from one side of the country to the other. Fred Harvey provided in Flint drinks and meals and after day 1 flight journey the Harvey Houses provided swift service to a waiting Pullman and the train ride and onto the next day's flight continuation.

This was a great little museum with some very interesting and unique exhibit pieces.

That's it for new and interesting places!