Battle of Plum Creek Bullets and Rails 2018 kicked off today with clear cool skies after the much rain Texas has had over the past month and a half.

Thankfully the grounds are not too boggy and suitable for carts today.

The resident Longhorns mayyyyy want to move their butts though before we start shooting! 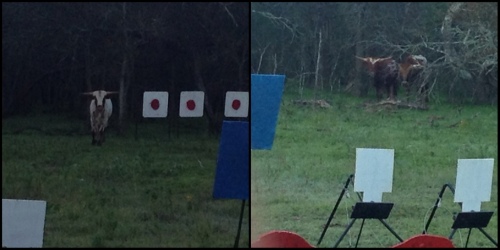 This is a great range and would recommend it for anyone trying to get to a shoot in Texas. Comanche Country Ranch, Lockhart has brilliant buildings for you to shoot out of. I can't really call them facades because they are so much more than that.

Although Jack and I didn't shoot Wild Bunch we hung out with them for the 3 stages, picked brass, pulled targets etc. 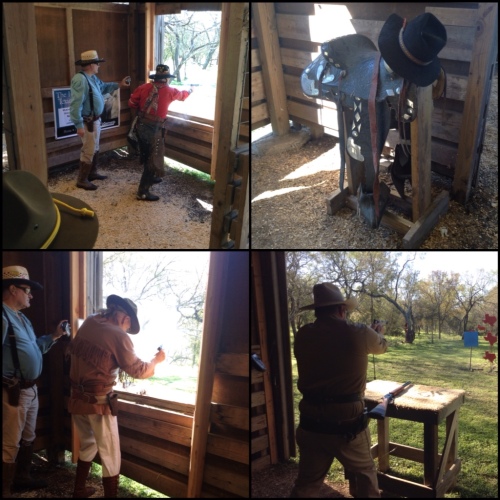 After Wild Bunch and some lunch it was time for side match speed events. We helped out some with Speed Pistol, shot it, speed rifle, shotgun and 'call your time'. Everything is running fine and ready for tomorrow.

We packed up and headed out to meet up with Artie Fly, Sadie and son Matt at the Caracara Brewing Company in Lockhart. Artie being a beer aficionado – a man after our own hearts! – suggested we try it with them. Great idea!

When we parked at the Caldwell County Courthouse the Day Of The Dead celebrations were about to get underway and I asked if I could take a photo. After the lady said I could, I got one and headed out of the way.

Off to Caracara and we had a beer flight to try out their four brews made in house right there. Lockertoberfest, Le Peche French Saison, On The Square IPA, and Plum Creek Porter. Very good indeed, oh and we tried 'Dingleberry' which was a mix of another local St Michael's Blackberry Mead with the Plum Creek Porter. Yum!

We had barbecue from Blacks Barbecue. The oldest major barbecue restaurant in Texas continuously owned by the same family. Oh my gosh, the brisket just fell apart and melted in your mouth. The sausage links were awesome and the beans, green beans and sauce were amazing.

Thank you Artie and Sadie (and Matt) for coming back from Austin to take in this experience with us. Good times!

Caracara also sell growlers unlike the glass one we bought in Amarillo it's a 32oz can, they fill it and seal it right there. Jack did a video of it and wanted to know if he could adapt his press! Lol! Brilliant!

Anyway, an early night as its Main Match tomorrow. Six stages ahead then banquet tomorrow evening. Followed by 4 more stages and awards on Sunday.

Have a great weekend no matter where you may be, shooting or not, just live!