Texas – red white and blue strong, patriotic to the core and proud.

The Yellow Rose of Texas – well I'd heard the song before, basically know the tune and had more than likely heard Pa's warbly whistling renditions of it as well.

Do you know the history of it though?

Where is all this leading to you might ask and indeed I though this would be a more straightforward reference to the spectacular B-Western outfit completed for Complicated Lady.

So I will give a quick insight into her outfit and then digress to the history lesson as such.

This one was to be a complete Texas themed outfit in red, white and blue to go with THE most gorgeous pair of boots.

I started it back in the US and the fabric that came was not to our liking, whilst the blue was a bit deeper than expected it actually will absolutely nail the colour in the boots but the red was giving me fits.

I'd ordered a true red and what came changed like a chameleon in many different light sources to the point that I had to disappoint and not have it finished for when she wanted to debut this beauty. It looked burgundy more than anything. Insert mild tantrums and tears from me here!!

So into the shipping container and wait on its impending arrival. In the meantime, I had managed to locally source the same sort of suiting fabric in the brightest red that made my heart jump for joy!! 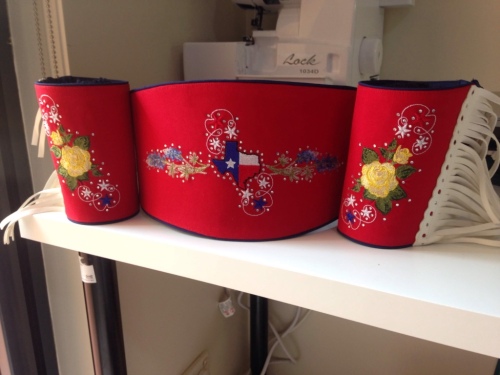 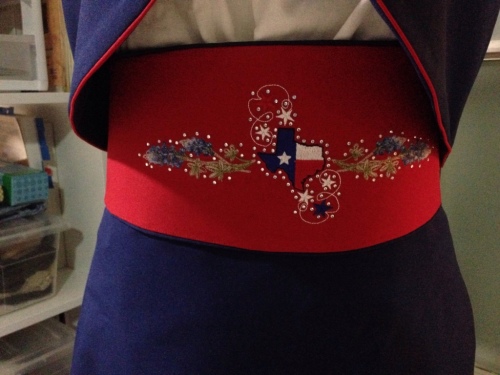 I now couldn't wait for it and my machine to arrive so I could crack on with this project! 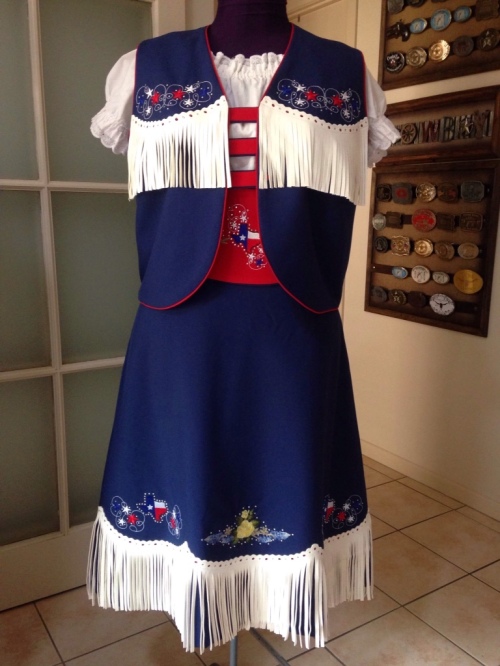 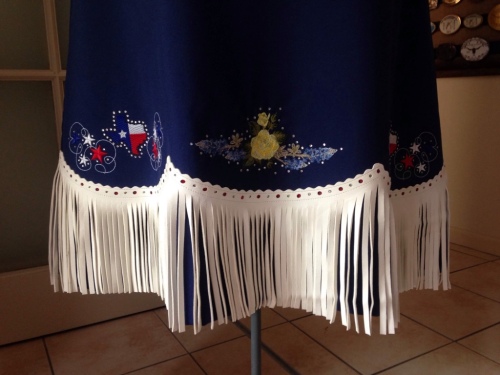 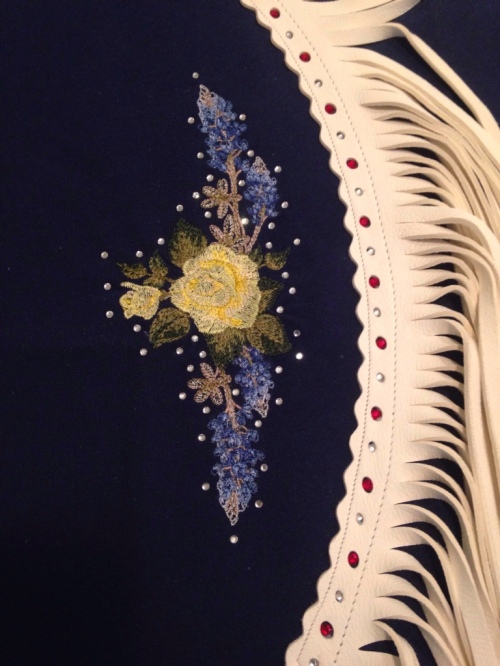 Now back to 'The Yellow Rose of Texas'. To start The Alamo – Medium tells me 'the term “yellow” was commonly used in the 1830's to refer to mulattos and “rose” was a popular euphemism for a description for a young woman' (mulatto meaning a person of mixed white and black ancestry)

Blackpast.org explains 'West's possible forced separation from her black lover and her placement in Santa Anna's camp. According to legend, inspired her lover to compose the song we know as “The Yellow Rose of Texas.” Publicity surrounding the hotel in San Antonio that was named after Emily Morgan asserts that West was a spy for Texas'

The song is a traditional American folk song that originated in the 1850's. The earliest version found in Christy's Plantation Melodies No.2, a song book published under authority of Edwin Pearce Christy in Philadelphia 1853.

The song has since been reworked and recorded by many an artist including Gene Autry, Roy Rogers, Elvis Presley and Willie Nelson to name but a few. It was chosen as one of the top 100 great Western songs of all time.

Mitch Millers version in 1955 became a gold record achieving #2 position in the UK and #1 position in Australia.

During the American Civil War it became popular with Confederate soldiers in the defeated Texas Brigade of the Battle of Nashville. Texans remained ever gallant even in defeat.

Who was Emily West? Emily D. West (c. 1815-1891) also known as Emily Morgan, is a folk heroine whose legendary activities during the Texas Revolution have come to be identified with the song “The Yellow Rose of Texas”. West was a free woman of color, of mixed race, or a “high yellow”…….in 1836, with other residents, she was kidnapped by Mexican cavalry. Forced to travel with the forces of General Santa Anna as they prepared to face the army led by Sam Houston, she was in the Mexican camp on April 21 when Houston's men attacked. The Texans won the Battle of San Jacinto in 18 minutes.

According to legend, Santa Anna was caught unprepared as he was engaged in 'other activities' with West when Houston struck. This was reportedly recorded in a journal in 1842 when a gentleman was told the story by Sam Houston during a steamer trip.

In any case, historians question the reliability of such a story but as history often predicts (bit like Chinese whispers), stories get embellished, legends are made and so it becomes. Why shouldn't we think the defeat occurred by those means?

Emily West has been immortalised in history regardless and a hotel, The Emily Morgan Hotel, in downtown San Antonio, is named in honor of the Texas heroine.

Maybe this outfit should be called 'Emily'?