After arriving in Edgewood Monday afternoon and checking in, Tuesday morning brought purpose to this next week of shooting.

It was Warm Up Match. We completed 8 stages for the day. All going good so far. The range is set up with some great stage design, a reasonable amount of movement this year but targets are still generous in size and distance. It will be an interesting match!

A wall honouring previous World Champions has been put together in the Belle Union Saloon. A fantastic tribute to our overall Cowgirl and Cowboy World Champs since SASS began. Some have passed, some don't shoot anymore, and some are multiple champions.

There is also a special tribute to the late U.S. Grant (SASS#2) who did so much for our sport and we were lucky enough to have had the pleasure of shooting with him.

Well done to all involved with putting this all together.

Prize draw is different this year too with everyone receiving a ticket in your pack to be placed in the jar relating to the prize. There is anything from guns, ammo, rigs or clothing vouchers to be won.

Into Wednesday and it's going to be another warm one today. This morning there is the cowboy flea market, time to visit vendors and peruse their wares, and, if you care to, take part in the odd side match as well.

This afternoon's Opening Ceremonies begins with Handlebar Bob as fabulous MC, introducing the Wild Bunch and proceeding with the colour guard of flags for nations represented at the 2015 World Championships. 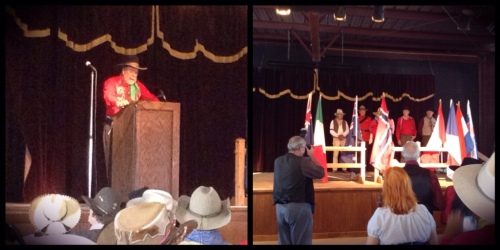 The Star Spangled Banner was sung beautifully by Miss Autumn (Starr?) who has performed at the famous Carnegie Hall.

SASS Scholarship awards were handed out to some very worthy applicants by Justic Lily Kate, the new 2015 Regulators were announced by Hipshot (and to note, our good friends from Texas – Texas Mac and Texas Flower were part of this years recipients) the Judge was presented with a beautiful portrait photo from Major Photography in appreciation of their 20th year of SASS attendance, providing posse and action photos to Cowboys.

In closing Misty Moonshine gave a short eulogy type/let's remember US Grant tribute and a poem by Lassiter about remembering how to be cowboy and the spirit of the game, basically.

The canon went off with a bang and we all dispersed to pay respect to US Grant, hit the bar, eat and on to the Cantina for Margaritas!!

A good time was had by all and we look forward to a great weekend of shooting.

P.S. Among the vendors today, there is one called 'The Old Pine Box' they make beautiful pine box coffins…..I know, I know but I thought it was amusing and took Jack back by there because he always says he wants 'to go out in a pine box' – simple.