We headed out to further the Mormon experience of St. George and took a tour of Brigham Young's winter home.

He would come here from Salt Lake City to avoid the cooler climate and get a little relief from his rheumatoid arthritis.

Into the little white side building we commenced the tour with Elder Johnsen.

In the beginning Joseph Smith, having written the Book of Morman, was the first prophet of the church. He had been driven out of New York into settlements in Missouri and on from there.

Haun's Mill Massacre, 2,500 men rode in and killed many Mormans, tar and feathering Smith and driving many others out of Missouri.

Whilst Smith was undergoing all this, Brigham Young was taking care of business. He sent many families north and south to settle and create missions at both ends of the spectrum. People with different skills were sent to create functional settlements.

By 1861, 79 families were established here in St George and a further 360 families were later sent down to the cotton mission. A lot of the families were from the south, and having experimented with cotton in previous years, assisted the mission in cotton production, hence where the name Dixie came from.

Cotton provided for their needs during the Civil War. Later it was more viable for them to buy rather than produce it themselves and so the cotton industry faded out. The cotton mill still exists today but has been restored and used for other purposes.

They also established a silk industry here and the tree in the back yard is one of the original mulberry trees. Young taught the people to be resourceful and to try different things, it also allowed them to decorate with the silk.

This is what St George used to look like when they first came to settle – looking towards the red cliffs. I'm sure they wondered why they had been sent here to such an unforgiving looking place at the time.

Zion, as it was called at that time, was why they came because a prophet had made the calling.

Erastus Snow was the guy who looked after everyone when Young was not here, only coming down in later years for winters.

The back section of the home is original of 1871 and in 1873 the front two stories were added. The small white office we had the initial part of the tour in was added in 1876. The office was used for selected brethren meetings. They would work up ordinances for the temple, marriages, baptisms etc.

Young named St. George after George A. Smith. When the communities were getting scurvy he taught the people to grow potatoes and to eat the skins, so they did and avoided getting sick – that's how they came to call him Saint George. When it came time to name the town they went to Young and asked it to be named St. George.

George A. Smith's rocking chair gives an idea of his stature. The Indians called him man who can be taken apart. He had a toupee, glass eye and wooden leg.

Soap, candles, cheese etc were made in the outdoor pantry off the verandah. They often lowered stores down wells to keep them cool – no refrigerators in those days!

Thomas Cottam furniture builder and master woodworker created a lot of the pieces in the house. The timber work is just outstanding and even wih limited resources they have produced beautiful work. The craftsman, used to seeing the beautiful variations of European timbers and hardwoods, only had the softer, plain pine timber from Pine Valley. So the various timber 'look' is actually grain painted and stained to create the oak and cherry.

Interesting fact: The bee hive significance means worker, industrious. And indeed everyone worked hard and they have created many industries.

Like most houses the parlour was where entertaining was done. The table in the centre – pine – was his original table but looks like cherry. The 'marble' fireplace original is also timber and painted using a feather. See! techniques we use today to create faux techniques were being used in the 1800's!!

Brigham Young passed away when he was 75 years old. A very learned man despite only 11 days of formal schooling. He is known as one of the greatest colonisers having settled 400 areas between Alberta, Canada, South California, parts of Mexico, and Polynesian islands.

He had plural wives but his wife Amelia, unable to have children, helped with various affairs, and looked after him with his rheumatism and had a wonderful singing voice. The box piano although not hers is similar to what she would have used. The box piano so named for the legs and pedal sections being removed to transport in an open wagon.

Again the fireplace in the dining room, although looking like marble, was indeed painted pine. The temple sketch on the wall was drawn from a dream Young had about what the temple should look like. 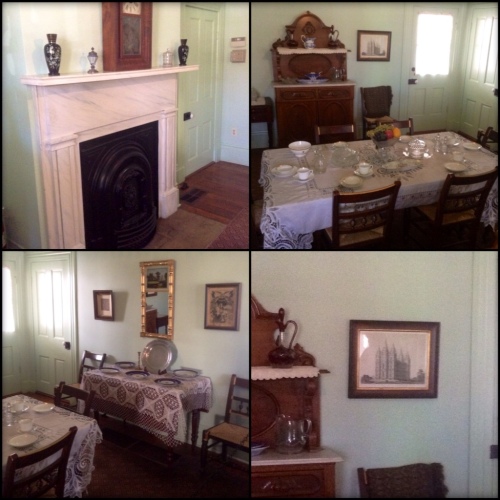 The hired help stayed in the upstairs room and were not to be called servants. They were all gods children and deserved to be treated equally.

The doll on the pedal sewing machine was one of 13 Cottam had made for the girls (he probably made tops for the boys).

The bed, armoire and chair are all original. No 'built in' wardrobes in those days as it was treated as a separate room which meant the house could be taxed more, hence armoire's were used.

The windows are beautifully detailed, Young said that the sunshine flooding the room also reminded him of the lords word flooding his life.

In his room is the chair that his portrait was taken in. The feet of the chair were lions feet – he was known as the lion of the lord. The pineapple on the back of the chair signifies hospitality. Check out this chair! Pine of course but upholstered in horse hair! Extreme resourcefulness.

All the Mormon people we came across are very quitely spoken, although passionate people. Not a lot are from the direct region as we found out when we visited the St. George, Utah Temple.

The Utah Temple was the first to be dedicated in the West. The people were given the task of building the temple and did so before ever building their own homes. It took them an amazingly short 18 months to build. It was built with red sandstone from the red cliffs and was coated with gypsum to seal it. Hence the gorgeous white we see today and it's illumination of a nighttime is a spectacle on its own! It has recently had its clean and repair so we are lucky to be seeing it in its pristine glory. 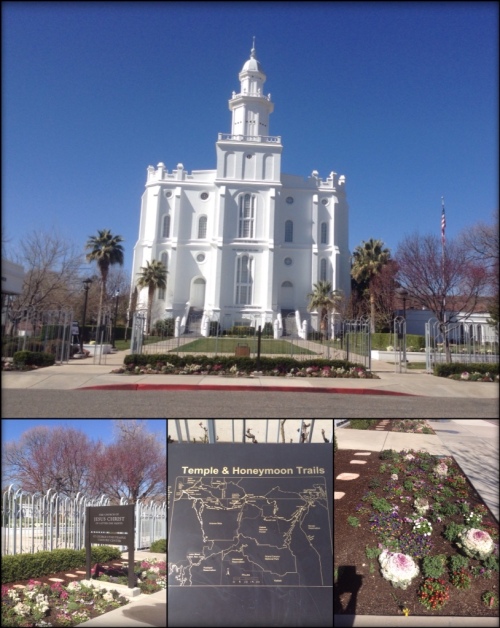 The smaller tabernacle further in town is currently being refurbished for seismic protection. None of the tabernacles, churches or temples for the Latter Day Saints have a cross on them as they believe Christ still lives among them. Some may appear to have a cross but they are in fact weather vanes.

In the visitor centre we saw how the lead filled canon was used to pound rocks and earth for the foundations of the temple – perhaps a better use for a canon. The centre also shows a timeline from 1871-1877 of the colonisation and subsequent building of the temple, all the while with full glass windows and the temple as a backdrop – today against perfect, cloudless blue skies and manicured lawns.

Into the explanation room and their are pictures of some of the rooms within the temple. You aren't allowed in the temple (as an everyday person) once it has been dedicated, unless you are a member of the Church.

The baptismal room with its full plunge pool features cows around the base symbolising the twelve tribes of Israel and are facing outward to signify the word reaching all wherever you may be.

The celestial room is a place for reflection, no phones, no clocks, no technology, and you would sit in silence or speak in humbled tones and quite voices.

All the Sisters and Elders are from all across the globe. The girls are sent on mission for 18mths and the boys 2years. We spoke with one from France, Chile, Texas, Washington, Brazil.

St. George, Utah is indeed a city steeped in religious history. Whether you are religious or not, this history formed what is today. The trials, tribulations and monumental tasks settlers undertook, makes for a very interesting and insightful visit.