After breakfast this morning we caught the bus up to Dokumentation Obersalberg then transferred to another bus that would take us up the rest of the way to Kehlsteinhaus. In other words, Eagles Nest or 'Hitler's lair'

Talk about take a run up the hill! A winding one lane road that the bus driver virtually took a running start at flinging us up the mountain. 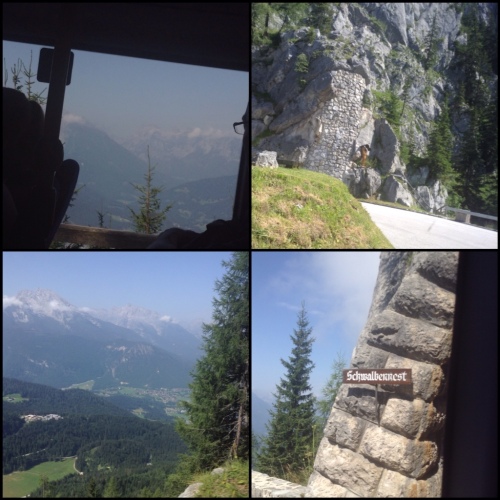 The weather is spectacular today with clear blue skies, sunshine and warm temperatures. Jack said the last time he came here with his Dad it was misty and couldn't see much of a view at all so he is very pleased today.

The views from the bus to the mountains is just spectacular and think we have been blessed with the great weather.

Once here you have to check in a return trip time and we booked an English speaking tour (35minutes with Stephen) which was well and truly worth it. So my next lot of ramblings on here are furious fingers typing during the tour. Well, with some touch ups after the fact.

Kehlsteinhaus along with its 124m access tunnel and then a vertical 124m vertical lift shaft was built in just 13 months with some 3000 men (on tour we were told 8 men perished during the construction, other sites say up to 12) and about $150M. A pretty impressive effort for its completion in 1938.

Obersalzberg meaning 'Above the salt mountain' was in 1923 where Hitler spent most of his time. A small hut later he called his 'struggle house' was where he wrote 'Mein Kampf' in 1925. In 1928 he rented Wachenfeld House and when he purchased it in 1933 it was transformed, 50 rooms added converting it into the Berghof. This would later be instrumental in its use for diplomatic functions and where many of his decisions were made.

At Kehlsteinhaus, the great hall had a huge picturesque window made up of 90 panels of glass with a marble desk across the full window. The window was also hydraulically lowered into the basement (and raised) for uninterrupted views to the mountains. Half of the mountain range is in Germany and the other half in Austria.

Hitler himself was in fact an Austrian who later became Chancellor in charge of of Germany.

The Obersalzberg area was bombed by the British but Kehlsteinhaus was the only one not affected and therefore remains today. Whether that was strategic or not is a question for others from that time period.

The project was to be a political meeting point and tea house.

The building is 80% concrete finished in granite and sandstone with the 'palace' entrance consisting of 2 sets of brass doors. These brass doors, if you look carefully, have inscriptions of the past in them. Soldiers, allied forces and others names and dates, before it was made a historical site can be found – in the right light – scratched into the brass.

It's around 30C/86F and humid outside today but as you move into the tunnel it drops dramatically to a cool 7C as it cuts back into the centre of the mountain. The lift entrance is in a domed room called the waiting room.

In a separate tunnel that runs parallel to this one is the 8hp submarine diesel engine, still original as it was put in in 1940 with her original tools and spare parts, she is maintained to meet German guidelines every year and still operates the lift and everything else.

The full brass lift is original to the building. It used to be two levels with a lower deck carrying workers, tools and supplies as needed. The lift goes around 40ft per second so was no time at all to go the 124m to the top.

Coming through the dining hall the cedar panelling is still original. It was more a banquet hall back then with the great hall having cosier round table and seating.

The marble fire place, like the brass doors, now has its own battle scars. Some troops inscribed their names in the table and fireplace while others used their bayonets to chip pieces off the fireplace to take home as a souvenir. 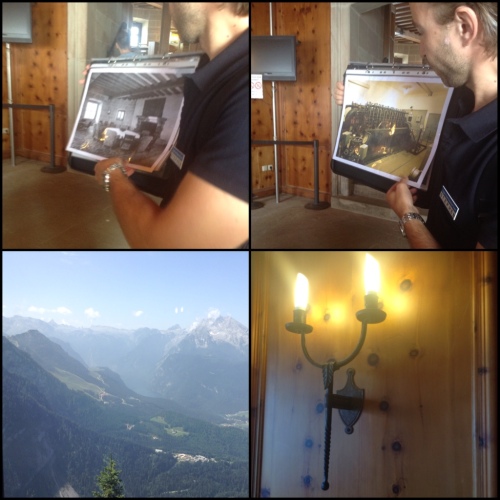 There were only 14 official visits made by Hitler and Eva Brauhn to the house, most of the dealings were done at the property in Obersalzberg.

After the 3rd infantry of US moved into Berchestgarden in May 1945. The house became US controlled until 1952. You could pay 50c and come up by army jeep to have a visit.

The first photo of the Kehlsteinhaus by an Allied, was shown in the movie Band of Brothers.

Once the tour was finished we went onto the sun porch and further information boards, then making way through the outdoor restaurant and trekked up to the cross at the top of the summit. The views are truly spectacular!

As we sat on the deck for lunch we watched as cloud rolled in and left again, truly in awe of this scenic site. It was literally covered in tourists from all nations. 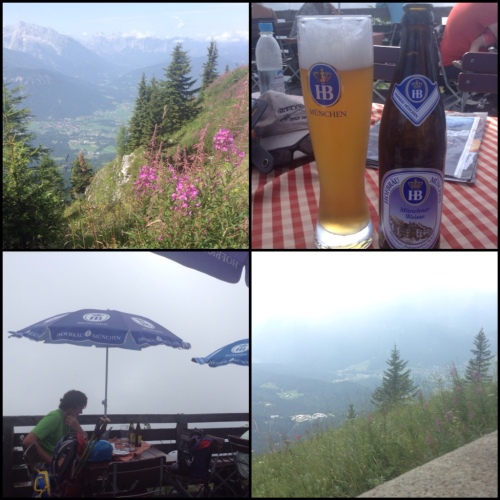 We caught the bus back down to Obersalzberg, then alighted and found the museum. A small price to pay to see a lot of photographs and information (albeit in German, with only brochures in English) but the true highlight was the bunker!

Now I don't condone what went on during that period of history but he was a very clever and forward thinking man and I'll leave it at that.

This was a great day. I'm glad Jack got to go again and see where his Dad had been in the war as an allied airman. His visit to the Dokumentation Obersalzberg was successful too when he got to speak with a curator about pieces his Dad had in his possession from Hitlers office when there on an R and R break in May, 1945.

Thanks Berchestgarden for having us, tomorrow we move on to Cesky Krumlov in Czech Republic.