We left the girlies Friday morning and headed West towards Gunnedah, NSW. We wound our way through some small and historic towns.

Singleton – established 1820's by John Howe. The Main Northern Railway line reached Singleton in 1863 and remained the end of the line until 1869. It still has a number of historic buildings including the court house (1841), churches and pubs with some rural mansions dated between 1828-1877.

Muswellbrook – est. 1833 or gazetted. It was explored by John Howe also in 1819 with the first white settlement in 1820's. It too, had a number of heritage listed buildings.

Aberdeen – just north of Muswellbrook, it lies between there and Murrurundi. Aberdeen is named after the Scotland Aberdeen. It's first post office opened on 1st August, 1856. First police station 1862. First school 1864 and by 1866 it also had two churches, 3 inns, a few shops and a steam driven mill.

Scone – 'Horse Capital of Australia', Scone was named in1831 after Scone, Perth and Kinross, Scotland by Jason Kent Toth. It was gazetted in 1837. The Scone Cup is one of the richest country racing days in New South Wales and Australia.

Blandford – a small village outside of Scone had an 1872 railway station (no trace remains) and horse farms such as Aquis Farm and Emirates Park reside here.

Murrurundi – est 1840 after European settlement began in 1820's. Thomas Haydon, a local landowner established his own township called Haydonton adjacent to this and in 1913 the two merged to be Murrurundi that it is today. It is said to be an aboriginal word meaning “nestling in the valley”. According to Wikipaedia it it in fact means “five fingers” a representation of the rock formation visible at the northern end of the town.

Ben Hall – The infamous bushranger's father Benjamin Hall had a small farm near Murrurundi in 1839. Ben Hall lived in Murrurundi until he was 13.

Quirindi – early spellings 'Cuerindi' and 'Kuwherindi' was gazetted in 1884 with its Post Office opening January 1st 1858.

Breeza – Ben Hall Senior worked on a station here at one time. Another bushranger Frederick Ward, known as Thunderbolt, robbed a man here in 1865.

And finally we reach Gunnedah – Koala Capital of the World – a farming region for cotton, beef, lamb, pork, coal, cereal and oilseed grains. It is home to Australia's largest annual agricultural field day which coincidently just finished this last week on Thursday. Gunnedah was settled by European sheep farmers in 1833-34. Coal was discovered on Black Jack Hill in 1877 and by 1891, 6000 tons of coal had been raised.

So after our brief township history lesson we are ready for this weekends match!

Namoi Pistol Club hosted this year's Buff Camp. Buffalo Camp is a Pat Garrett match that utilises all cowboy guns as well as a large lever action or single shot calibre in the mix.

Each stage had 6 rounds of large cal ammo, 10 rounds rifle, 10 rounds pistol and 2+ shotgun. Ten stages of fun with side matches held on the Friday.

We arrived Friday to warm weather and played with other cowboys and cowgirls doing some side matches before going to check into the motel. The precision pistol and both rifles was a bit of fun with an extremely small buffalo target wayyyyy out there! 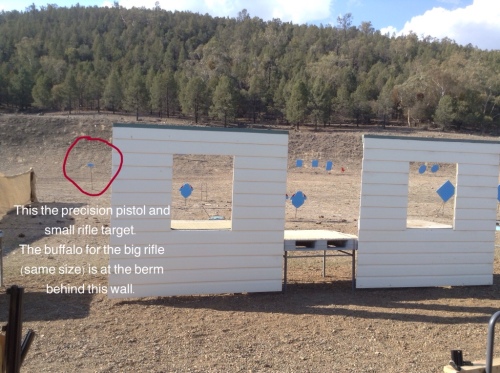 It is so so dry out here due to the drought and of course the match is on and the area is expecting rain. However, the rain stayed away with just a cool start to Saturday morning. Six stages were completed by mid afternoon and some have faired a little better than others in the fun that was. 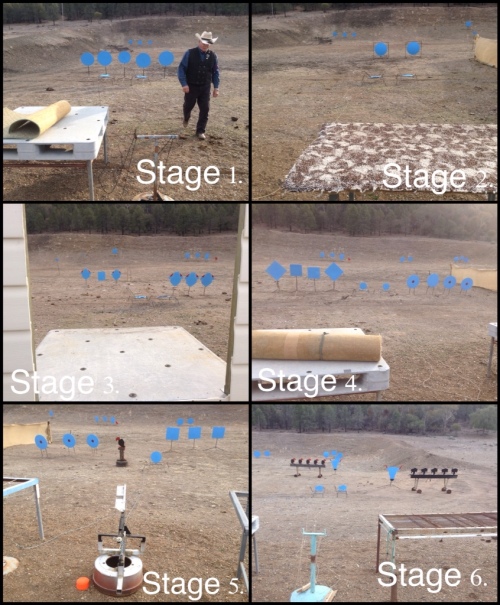 Saturday night we had some very good showers in town and guessed they had same at the range. They had some steady showers which had definitely settled the dust!

Sunday morning it was cool but few clouds around made it warm quickly. With 4 stages left to do the clouds moved in near lunch time and a few drops started just as the other 2 posse's were finishing their final stage. 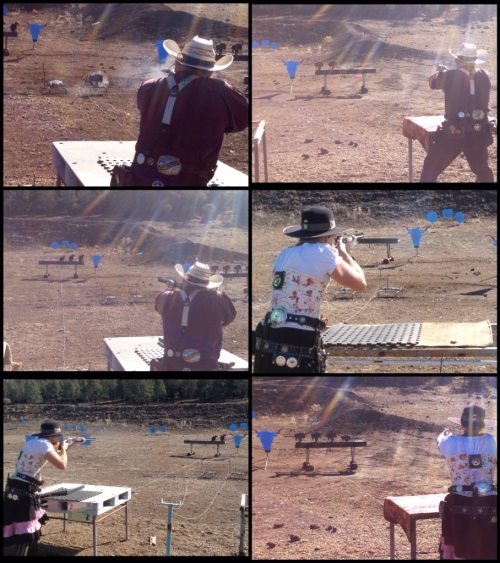 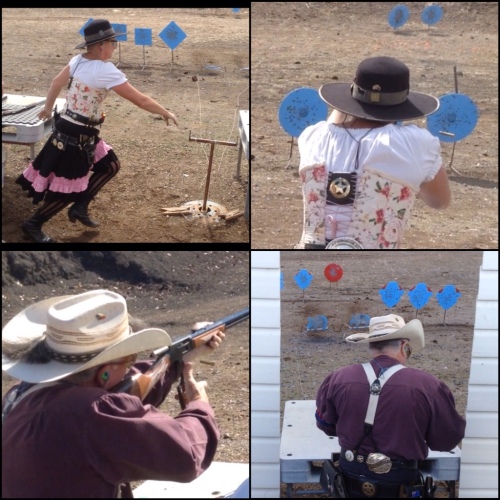 Fortunately with everyone squared away the rain hit hard with thunder and some hail! It soon cleared again and with everyone under cover (just in case another round comes) the awards got underway.

Jack won the Speed Rifle and I was 2nd, although Jack thought it was the other way around. Congrats man! He placed 2nd in Silver Senior and I was 1st in Lady Wrangler. 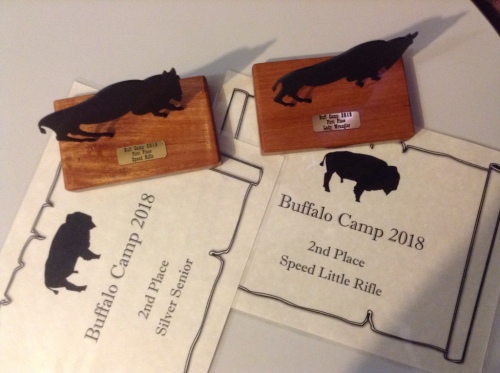 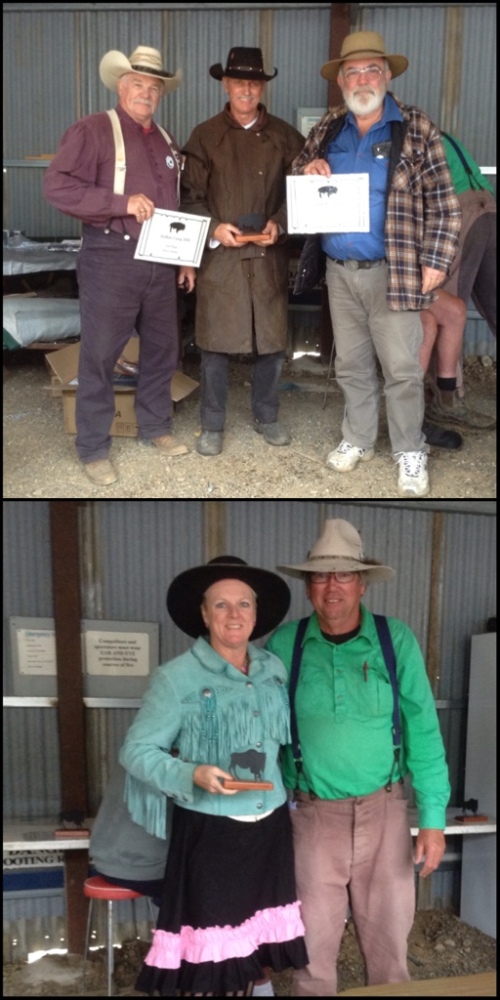 Congratulations to all 62 competitors – there were no 'clean' matches!

Congratulations to Drop Bear in 1st place overall and I came in 5th overall and 1st lady. 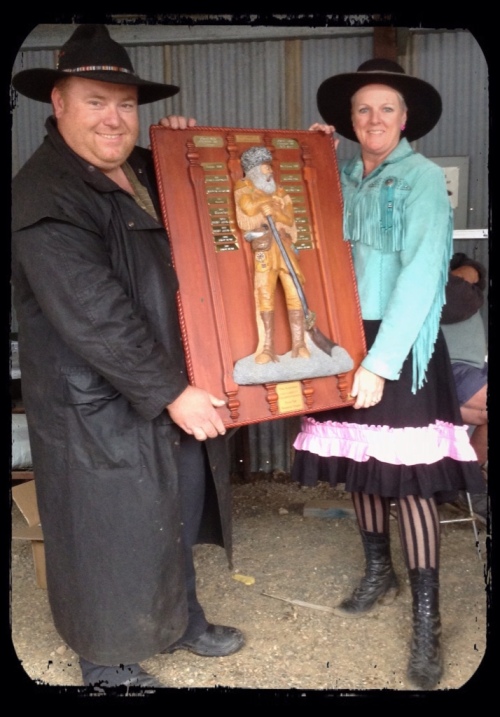 Thank you again to all the members of Namoi Pistol Club, the ladies who worked the lunches, morning teas, scoring and to the Match Directors.

We had a blast!