We left Tullahoma, TN this morning and it has been raining overnight. Not long into the trip and it's raining on and off.

Not far from Jackson and not our intended tourist stop for the day, we pulled into Parker's Crossroads for a quick look. Part of the Tennessee Civil War Trails, this where Union Troops led by Col. Cyrus L. Dunham fought Confederate Gen. Nathan B. Forrest's cavalry on December 31, 1862. This is where Forrest gave his famous order to

“Charge them both ways!”

Forrest had been dispatched with his 1800 men to sever U.S. Grant's rail communications in West Tennessee. After a successful two-week mission across the region, Forrest then headed east toward the Tennessee River. 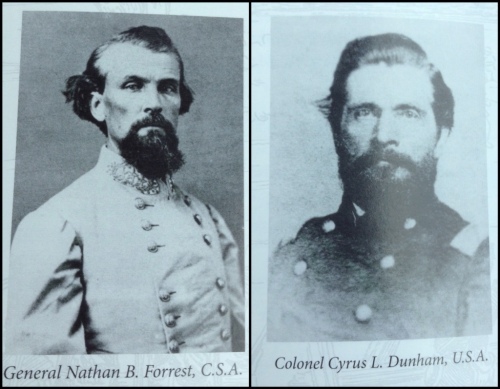 Five miles northwest of Parker's Crossroads they stopped for a couple of days. Union Gen. Jeremiah C. Sullivan saw a chance to capture Forrest. He sent two brigades to trap the Confederates.

The morning of the 31st, after learning that Forrest's troops were at Flake's Store, Col. Dunham's brigade of 1500 men left Clarksburg and marched South toward Parker's Crossroads.

While unrelenting artillery fire held Dunham in place, Forrest ordered an attack on the Union rear. Dunham about-faced most of his brigade and charged southward but his forces were surrounded. With the battle seemingly over, Forrest parlayed with Dunham for surrender. Suddenly, Col. Fuller's entire Ohio Brigade arrived from the north behind the Parker house, where it captured 300 Confederate horse-holders.

Forrest was now caught between the two Union brigades. He thundered, “Charge them both ways!”, gathering 75 men and charging into the left flank of the Ohio Brigade. The swift counterattack disrupted the Union attack and Forrest escaped, heading to the Tennessee River Ferry crossing at Clifton.

(The above has been written from the Parker's Crossroads brochure)

Forrest led a number of brigades through several battles during a a four year period from1861-1865. He later became a member of the Ku Klux Klan in 1867, just two years after it was formed and was elected its first Grand Wizard.

He remains today as a highly controversial individual. Ya think!?! A very interesting story behind this Civil War General indeed.

So there's a little piece of history in brief for today's trip.